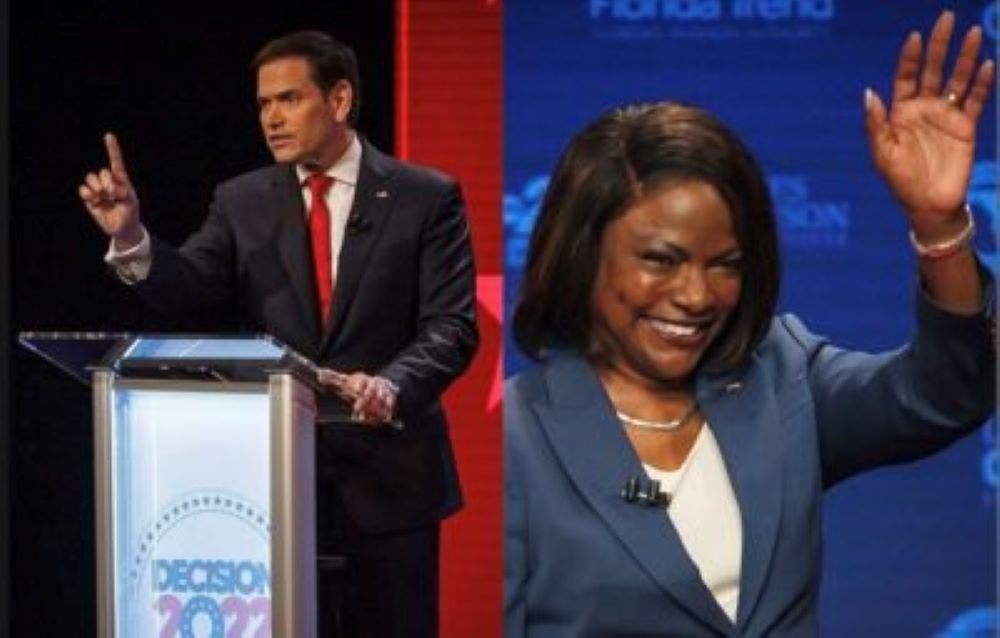 After Tuesday night’s debate between Congresswoman Val Demings (D-FL), and Senator Marco Rubio (R-FL), the flip-flopping Republican can give a master class on being owned. The Miami-based United States Senator would have faired better by just staying home – with his attendance record on the job, no one would be surprised.

It didn’t take long to realize that Rubio was out of his league. The spineless GOP stooge was no match for the former police chief, who danced backward and in high heels all over the Republican legislator’s lies.

Rubio has received millions in campaign funding from the National Rifle Association. Demings reminded the Senator that common sense gun legislation isn’t about the Second Amendment, but “This is about taking dangerous guns out of the hands of dangerous people, and the overwhelming majority of people in our nation want us to do just that.”

But the law enforcement veteran wasn’t going to let her right-wing talking point pushing opponent off that easy.

How long will you watch people being gunned down in first grade, fourth grade, high school, college, church, synagogue, a grocery store, a movie theater, a mall and a nightclub – and do nothing?

During tonight’s debate in Florida, Rep @valdemings stole Marco Rubio’s lunch, made him watch her eat it, and then hit him over the head with his own lunchbox. pic.twitter.com/KXetwsmd2b

After 19-year-old Nikolas Cruz murdered 17 at Marjory Stoneman Douglas High School on February 14, 2018, Rubio promised to raise the age limit to purchase AR-15 rifles from 18 to 21. However, four years later, Rubio proves – once again – that he is neither a man nor true to his word.

When asked by the moderator if he stood by the promise he made four years ago, the 12-year Senate veteran answered, “Denying the right to buy it isn’t going to keep them from doing it.”

A former detective, Demings hammered her opponent on his anti-abortion stance. Senator Rubio told CBS Miami that, “he was in favor of a total ban on all abortions with no exceptions for rape, incest or human trafficking,” Politico reported. “As a 27-year law enforcement officer who investigated cases of rape and incest, I’m appalled and disgusted. Rape is a crime, incest is a crime, abortion is not,” Demings said in response.

The issue of exceptions has been a contentious one in the abortion rights debate, with more and more Republicans on the extreme end of the issue.

Demings let her feelings be known, based on her experience as a law enforcement officer, “No Senator, I don’t think it’s okay for a 10-year-old girl to be raped and have to carry the seed of her rapist.”

Rubio recently signed on to his colleague, Sen. Lindsey Graham’s (R-SC) nationwide 15-week abortion ban. Rep. Demings said in a statement, “This is just the next step in Marco Rubio’s fight to ban abortions with no exceptions for victims of rape, incest, and sexual abuse.”

The daughter of a maid and a janitor, Congresswoman Demings closed out the debate with a powerful statement on what being an American means to her.

Had the awesome honor of being the first in my family to graduate college. Served at the police department, worked my way up through the ranks to become the Chief of Police. Serving in the House, and now I’m running for Senate. Only in America is my story possible.

I think we can all agree she won the debate pic.twitter.com/25KSEz7ST2

Editor’s note: This is an opinion column that solely reflects the opinions of the author.