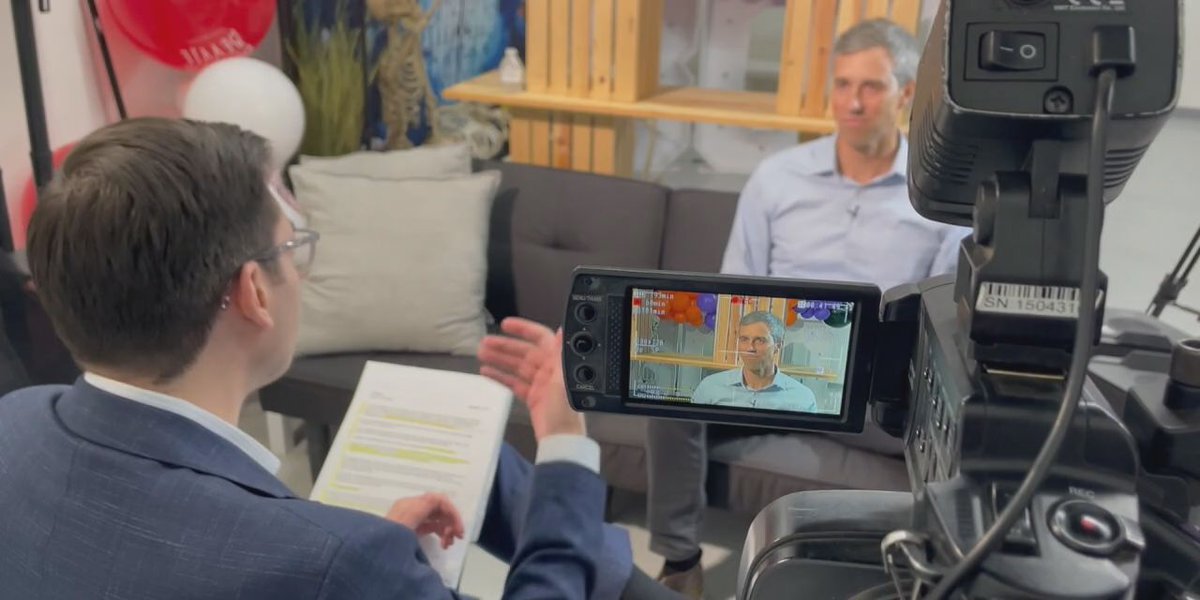 LONGVIEW, Texas (KLTV) – Following a campaign event in Longview on Wednesday night, KLTV 7 was given the opportunity to talk one-on-one with Democratic gubernatorial candidate Beto O’Rourke. KLTV 7 news anchor Blake Holland conducted the interview, just as he did with Texas Gov. Greg Abbott on Oct. 5 in Tyler.

Holland: You’ve spent a lot of time in East Texas during this campaign. Stops in Tyler, Pittsburg, Nacogdoches, Hemphill, Longview. Considering the results of the 2018 senate election in which no East Texas county turned blue, why pay so much attention to East Texas in this race for governor?

O’Rourke: In 2018, we really improved upon the margins that Democrats typically get in Gregg County or Smith County or Palestine or Pittsburg, any East Texas communities that frankly Democrats have written off in the past. That’s the base that we’re building on right now. And as you saw from our turnout tonight here in Longview, people are coming out, they’re committing to doing the work, and I guarantee that the voters in these communities, who so often been overlooked, might very well formed the margin of victory on election night. They care about the same things that voters care about everywhere across Texas: making sure the best jobs in America are found right here in Texas, investing in world class public schools expanding Medicaid so we can see a doctor and protecting every woman’s right to make her own decisions about her own body. This is an agenda for Democrats, Republicans, independents, East Texas, West Texas, and every part of the state in between.

Holland: In a 2019 presidential debate, you said “hell yes. we’re going to take your AR-15, your AK-47.” On a campaign stop in Tyler this year, we asked you about this. you said, “I’m not interested in taking anything from anyone.” Which one is it?

O’Rourke: The thing that I don’t think anyone’s confused about is where our priorities are. We want to make sure that our kids are more important than the NRA, the gun lobby or any politician. And to make sure that we protect their lives in the classroom, we gotta get something done. And what I know that is achievable right now in Texas, are common sense things that allow us to defend the Second Amendment and better protect the lives of our children. Like raising the age of purchase for an AR 15 from 18 to 21. Having a red flag law so that if someone is threatening to use that gun against someone else, law enforcement can intervene before it’s too late. Or a universal background check, which simply says if you want to buy a gun in Texas, we got to make sure you’re not going to use it against yourself or anyone else. We may not agree on every issue, but on those three priorities I think we can get a critical number of Republicans and Democrats around the table and get something done. You know, when it comes to assault weapons, I think Texans of all political backgrounds and every part of the state are sick and tired of seeing people especially children shot up with weapons of war. On these three areas, we can make progress and make sure that that is a rare exception until we bring it to a close altogether.

Holland: When it comes to the border, do you think the Biden administration is doing enough? And if elected, what will you do differently as governor to solve the problems at the border?

O’Rourke: We really haven’t had a presidential administration since Ronald Reagan was the president United States that’s done enough on our border. He was the last president to preside over comprehensive immigration reform. Our current Governor Greg Abbott though is making things worse. These stunts like sending migrants on buses to D.C. to New York, it may look good on TV, it’s not doing anything to better secure our communities. And I know that because I live in El Paso, one of the defining border communities in this state. We got to make sure that those who come to this country follow our law, and that our laws follow our values and our interests and our needs. That’s why I’m going to work with East Texas Republicans and Democrats on a Texas-based guest worker program, so that folks can find a safe, legal orderly path to come here and do work that we’re having a very hard time finding people to fill right now. So we’re going to go from the chaos, the disorder, the stunts to solutions that come from Texas.

Holland: Governor Abbott released an advertisement this week featuring the mother of a shooting victim. In the ad she says the gunman was released on bond, violated conditions of the bond 37 times, and then shot someone else. In the ad, the woman says, “Beto O’Rourke favors easy bail.” She goes on to say, “if Beto O’Rourke is elected governor, there will be more violence and more victims.” Your response?

O’Rourke: I can understand why Greg Abbott would want to scare us and lie about me. Because he’s unable to defend his record. Since he’s been governor, homicides are up 50% in this state. We now lead the nation in the number of rapes committed and the ability to bring a rapist to justice has declined by half. And all this has happened because he’s ignored law enforcement, who for example, begged him not to sign permitless carry into law. Now anyone can carry a gun public without a background check or any training or any vetting whatsoever. And not only have homicides increased, more cops have been gunned down in the state of Texas than any other state. That is the result of eight years of Greg Abbott in office. It’s why we need to vote for change in November.

Holland: If you lose this election, will you run for office again?

O’Rourke: There is no choice but to win right now. We cannot continue on this path of failure after eight years of Greg Abbott. And what is so encouraging to me is it’s not just Democrats who are saying that not even just independents along with them, it is Republicans who may even have voted for Greg Abbott last time, may have voted for Ted Cruz when I ran against him in 2018. But they see this extremism and record of failure and they want change. And what we’re seeing whether here in Longview, or any other part of the state is record turnout at our events. I think we’re going to see record turnout on the first day of early voting Monday, October 24. And throughout this election until we win it on the night of November 8.

Gov. Greg Abbott talks to KLTV’s Blake Holland about why he’s only participating in one debate, the border, a campaign ad with a Uvalde victim parent and more.

Chuck Haga: We care, fret and worry. But what are we supposed to do? – Grand Forks Herald
Guns Don’t Kill People | Opinion
I can’t forget the Sandy Hook shooting
BOOR REVIEW: ‘American Rifle: The Case for the AR-15″
Inland PAC fights for gun rights close to home – San Bernardino Sun