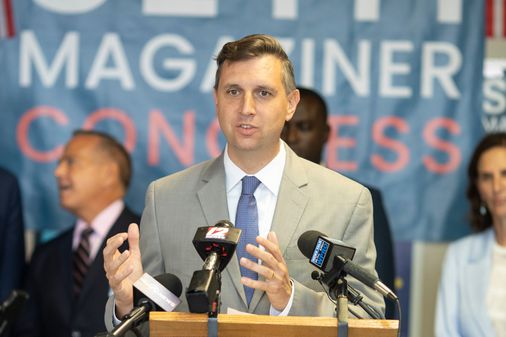 Rhode Island’s Second Congressional District isn’t exactly known for sending Republicans to Washington. The last time the GOP represented the district, which includes Cranston and parts of Providence, was over 30 years ago, and Democratic candidates for president tend to win by double digits there. Yet this time around, the race to replace the retiring Democratic incumbent, Representative James Langevin, is, unexpectedly, a dead heat.

And while the Republican candidate, former Cranston Mayor Allan Fung, has proved to be a formidable candidate with many positive qualities, the Democrat in the race, state Treasurer Seth Magaziner, is still better suited to serve Rhode Island’s Second District, and voters should send him to Congress.

First, Magaziner’s record as the state’s treasurer underscores his fiscal competence. Under his leadership, the state’s pension fund reached an all-time high — a result of a (formerly) booming stock market, yes, but also because of wise investments, consistently outperforming most other public pension plans. He also didn’t shy away from ambitious ideas, championing a creative major investment project to repair or replace school buildings across the state.

Get Today in Opinion

Globe Opinion’s must-reads, delivered to you every Sunday-Friday.

Second, Magaziner’s plans for Congress make him especially more compelling than his opponent. He would, for example, vote to codify Roe v. Wade on the national level, protecting abortion rights after the Supreme Court stripped them away. Fung, on the other hand, has a murky record on abortion, and while he told the Globe editorial board that he would support some abortion protections at the federal level, he was light on the details. And when it comes to guns, Fung has the dubious honor of an A rating from the National Rifle Association; Magaziner boasts an F rating and would support measures like an assault weapons ban.

Given the national mood, and polls pointing to the strong possibility of a GOP takeover of one or both houses of Congress, Fung has a decent chance of flipping the once reliably blue seat. And on the surface, there’s reason to think Fung would make a good congressman: He’s a refreshingly moderate voice in a party that’s growing more and more extreme each year; he refused to peddle conspiracy theories about the 2020 election, unlike many Republicans running for Congress; and his time as Cranston’s mayor shows his former constituents think highly of him, having elected him to serve four consecutive terms.

But Fung falls short in addressing the rise of Trumpism. While he condemned the assault on the Capitol on Jan. 6, 2021, it’s clear that Fung is not particularly keen on reining in the antidemocratic wing of his party. He not only voted for Donald Trump in 2016, but did so again in 2020. Like many of his Republican colleagues, he seems to have been willing to overlook — and therefore enable — the dangerous autocratic tendencies of the former president in the name of passing more conservative economic policies.

Most concerning is that when he was asked by the editorial board if he would have voted to impeach Trump on either occasion that came before Congress, Fung didn’t answer, saying he wasn’t there and doesn’t want to look backward and relitigate what the former president did. After the horrific events of Jan. 6, that question shouldn’t be difficult for Fung to answer. And it wouldn’t require that much political courage either, given that he’s running in a district that Joe Biden won by a double-digit margin. There should be no doubt that Magaziner would be a better check on the rising antidemocratic forces in the GOP than his opponent.

It’s in the national interest for moderate and anti-Trump Republicans to grow their ranks in Congress. American democracy requires two healthy parties, and Republicans shouldn’t cede the GOP to Trumpian, antidemocratic extremists. But unfortunately, at a time when defeating Trumpism is crucial to salvaging American democracy, Fung does not come off as an eager fighter. He would not, in other words, be a Republican congressman in the mold of Representative Liz Cheney, of Wyoming, who, despite being more conservative than Fung, is far more strong-willed when it comes to preventing a repeat of the Trump presidency. That reason alone is enough for Rhode Islanders to send Magaziner, not Fung, to Congress.