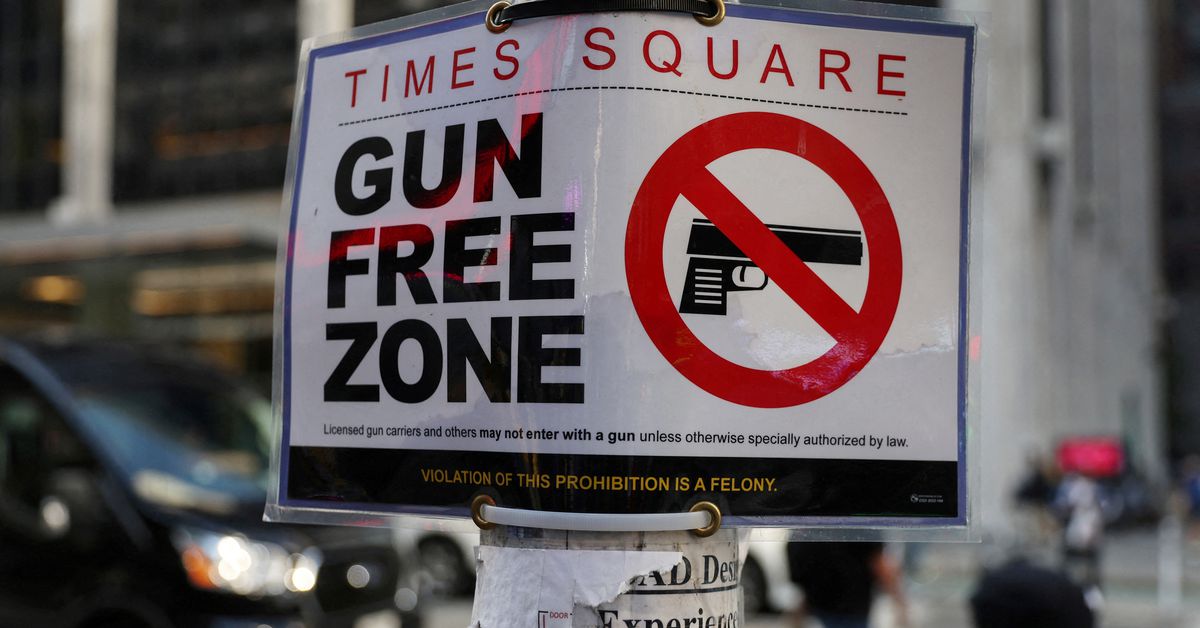 NEW YORK, Nov 7 (Reuters) – A federal judge in New York temporarily suspended many parts of the state’s new gun restrictions on Monday to allow members of a gun-owners’ rights group to continue their lawsuit challenging the new law as unconstitutional.

Judge Glenn Suddaby of the U.S. District Court in Syracuse agreed to issue the order at the request of six New York residents who are members of Gun Owners of America, which competes with the National Rifle Association in political influence.

New York’s old gun license regime was thrown out by the U.S. Supreme Court in a landmark June ruling that established an individual right to carry weapons in public for self-defense, making it harder for lawmakers nationwide to regulate guns in a country where mass shootings are commonplace.

In Monday’s preliminary injunction, Suddaby said New York officials could not compel people applying for a gun license to disclose the handles of their social media accounts or the names and contact details of everyone they live with, major provisions of the Concealed Carry Improvement Act which took effect on Sept. 1. Nor would applicants have to prove their “good moral character,” Suddaby wrote in the 182-page order, a length he ascribed to the new law’s “unprecedented constitutional violations.”

He also sharply pared back New York’s new list of “sensitive places” where it is a new felony crime to possess a gun even with a license, writing that the state could not ban guns in theaters, bars and restaurants, parks, airports and other public places. The bans, however, can remain in some places, including schools, courthouses and polling stations. He also suspended enforcement of a new felony of having a gun on private premises without the express permission of the property owner or lessee.

The fate of New York’s new law is being watched by leaders in California, Maryland and several other large states with gun regulations the Supreme Court found unconstitutional. The law is facing multiple legal challenges by gun owners: another federal judge last month agreed to suspend a provision making it a felony to have a gun in a place of religious worship.

New York’s Democratic leaders said the Supreme Court ruling would lead to more gun violence. They agreed to overhaul the law to remove a provision requiring license applicants to prove they had “proper cause,” or some kind of special reason for owning a gun. But they heightened the licensing requirements in other areas and banned guns in many parts of the state; many Republicans said the new law was rushed and would criminalize lawful gun owners.

In court filings, the state has argued the law complies with the Supreme Court’s new stipulation that a weapons restriction is only constitutional if it is similar enough to regulations that were common in the 18th century, when the U.S. Constitution’s Second Amendment regarding a “right to keep and bear Arms” was ratified.

Spokespeople for New York Governor Kathy Hochul, a Democrat who oversaw the passage of the new law, and Attorney General Letitia James did not respond to requests for comment.

Erich Pratt, Gun Owners of America’s senior vice president, applauded the ruling in a statement, warning Hochul and other politicians to obey the Supreme Court: “fall in line, or we will force you to.”