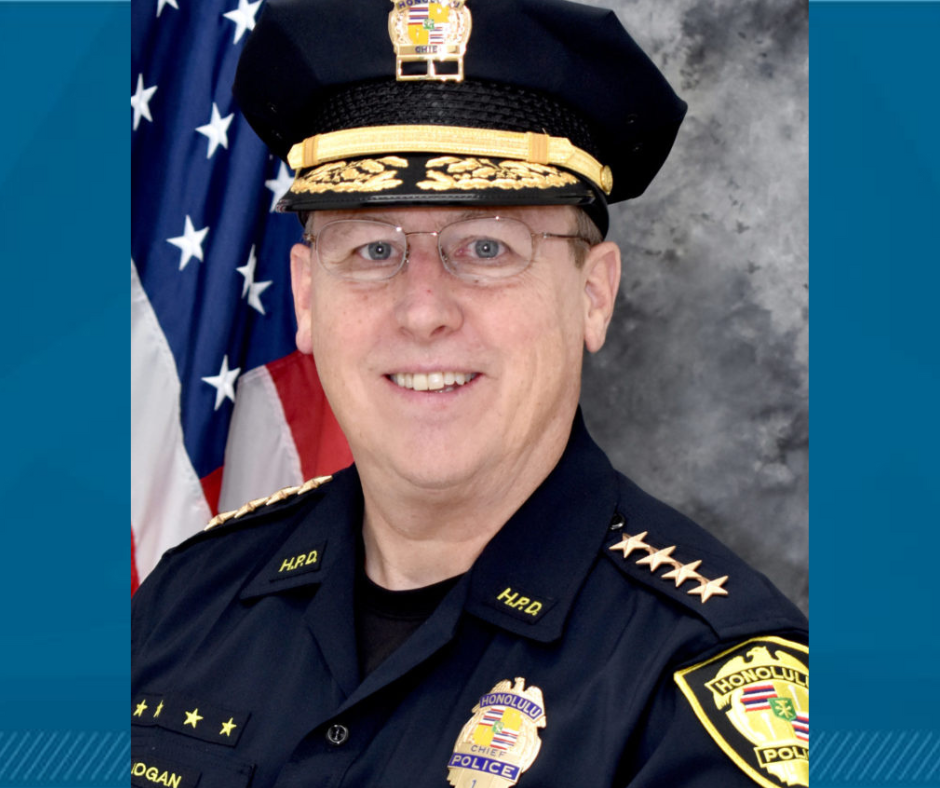 HONOLULU (KHON2) — Joining us in-studio Honolulu Police Chief, Joe Logan, to go over the top issues in Oahu public safety and the challenges ahead as he leads the department after difficult times under previous administrations.

KHON2: One of the things on top of people’s minds is, what is the latest on the concealed-carry gun permit processing and issuance?

LOGAN: So starting last Sunday, the rules became in effect. And so, we are now beginning the process of processing all the applications. We have something like about 600 applications that are already in. We’re going to take those applications. We sent letters to everyone over the weekend, so they should have got them either Sunday or Monday. Those letters provide all those steps or requirements to get their license to carry. So I ask that they fill out the documentation provided to us any other requirements that they need, like for our class on firearm safety, and then a shooting-proficiency qualification to ensure the public that these individuals can shoot at a target and hit a target at various ranges. And then, they can do that within a time frame. And so, they do all of that. They get their applications in, as we get the documents back from either medical facilities for inquiry or background investigation, then we’ll start issuing licenses.

KHON2: What do you think practically is the soonest that the first one could be approved?

LOGAN: It really depends. It depends on getting all the documentation in from the individual applicant and then the ability for us to get the information back from the health provider of the individual that they provided on the form. So it’s really, that’s probably the longer portion, the attempt to get that data back. But by and large, once we get that back, within a couple of days or a week, it’s got to come up to my office, I sign them and there we go.

KHON2: So could be in this calendar year?

KHON2: Gun safety is an issue we all are going to have to be aware of, whether you’re in the hundreds of people seeking a concealed carry permit or the possibly almost million people who are not seeking a permit. How are you going to walk that fine line about more legal guns in our community, while we also have a proliferation of illegal guns?

LOGAN: We do have individuals out there illegally carrying firearms, and we do our best based on information provided to us as HPD officers to investigate those. People who are found carrying guns illegally then we make those arrests as necessary and take those firearms off the street.

For the individual that already has a permit is a firearm owner, here in this state Hawaii in the City and County of Honolulu, as that person wants to file for a license to carry,. Then what they’ll do is fill out the application. Part of that is a four-hour class for given by a firearms instructor that’s either NRA certified or state certified, or maybe military certified, and then validated by our training division, that yes, this person is who they say are, yes, they have the credentials to, to instruct. And then, that person would go through this for four hours.
And in that four hours, we asked that they concentrate on gun safety: how to operate the gun, how to take the gun apart, how it shoots, what’s the mechanisms for that and then really take them to the person would go to training and familiarize themselves with various aspects of gun safety.
We’re also asking that they understand or teach of Chapter 134 of the Hawaii Revised Statutes, which is the gun laws, so where they can and cannot carry right now. But there’s nothing right now in the law that says they can’t carry in certain places. So that’s forthcoming from the city through the city council and or the legislature when they start up into January.
The other one is Chapter 703 of the Hawaii Revised Statutes, which talks about justification to use of force. So when would you use that? You don’t ever want to use a gun. Because once you pull the firearm out, if you just pull it out, or if you use the firearm, there’s a whole slew of things that can happen in the background after that event is over. Lawsuits, other things, you know, what liability did you incur? Is the individual actually a threat? Those are decisions, you know, we as police officers, we are trained for this. We go to six and a half months of recruitment school and then annual recall training and then just training by our own supervisors and our fellow officers on the streets. So we have a better understanding of how and when we can use it. The average citizen, probably not so much. But let me just say that all the applicants that we have, they’re law abiding citizens today, and so they’re not out to get into a confrontation with law enforcement, or anyone else. My whole conscious is based on that, that these are law abiding citizens.

KHON2: So people — the others who are not applying for a gun — just need to be aware, but not necessarily wary, of the people who are going to be carrying?

LOGAN: Yes, exactly. So I’m trying to balance the concerns of the average citizen who may not be gun-carrying people, they may not like the Second Amendment, or the new rule that’s now come down. And so they’d rather have less people carrying than more, but also weigh that against the Second Amendment person who wants to carry a gun and now is authorized by law. So how do I bridge that gap? And so that’s why I think the four-hour class and the why firearms proficiency testing is so important so that the average citizen understands that they’re not just somebody who grabbed the gun and is walking around armed. They’re somebody who’s trained, who’s familiar, and has some education on the use of that firearm.

KHON2: Let’s talk about efforts to improve transparency in general, including but not limited to crime reports and bulletins. We’ve seen some of those change after their first issuance sometimes. You’re leading a department that came from a pretty troubled past. So you’re rebuilding trust; and when those kinds of things happen, it can eat away at that. What are you doing about fixing those transparency issues?

LOGAN: So if there’s an issue or concern about something we put out, then we immediately find that correction. To me, that’s the most important, the faster I can get the word out, even if we made a mistake, is just to be honest. They say that’s an error we put up; we put this out. We should have reevaluated or checked the factors and then fix it and tell the public where, what is right and what we may have erred on. But also what I’m doing is, I’m rebuilding trust at one community at a time. So I’m out meeting all the different Rotary Clubs, Lions Clubs and other organizations that asked me to come speak. And so, I’m doing that one at a time. And, I’m getting in front of 30, 40, 50 people at a time. I’m talking about what is moving the department forward, how do I do that? Where am I doing that? Where do I see issues and concerns? What innovative technologies and other things can we incorporate into HPD to move it forward? And so those are the things I’m looking at. I’m very comfortable being out front and leading the organization and then that relationship between the Honolulu Police Department and our media partners, and how to you help us get all the information out there that needs to be out there.

KHON2: Coming up, of course, we have a big holiday this week, more holiday season to come. Drinking and impaired driving has got to be on the top of your mind.

LOGAN: Oh, absolutely. We have currently 48 fatalities year to date, which is just slightly above where we ended last year. So how do we help those drivers that feel that being impaired is okay to drive, and it’s not? How do we as the Honolulu Police Department protect everyone else that’s on the road that’s not impaired. So to do that, we’re going to have impaired driving checkpoints. And that’ll be out through the holiday weekends and through the holiday weeks. And so, that’ll help us reduce and hopefully eliminate the further traffic fatalities.

What is the status of Oregon Measure 114 new gun limits?
Biden Wants to Ban ‘Semiautomatic Weapons’? Dream On.
[Martin Schram] Police chiefs dial 911 — law-and-order pols need to answer
Number One Responsibility for All 46 Presidents Is Contained in the Oath of Office: Protect the Constitution
ILA | Ohio: Emergency Powers Bill Advances to House Floor