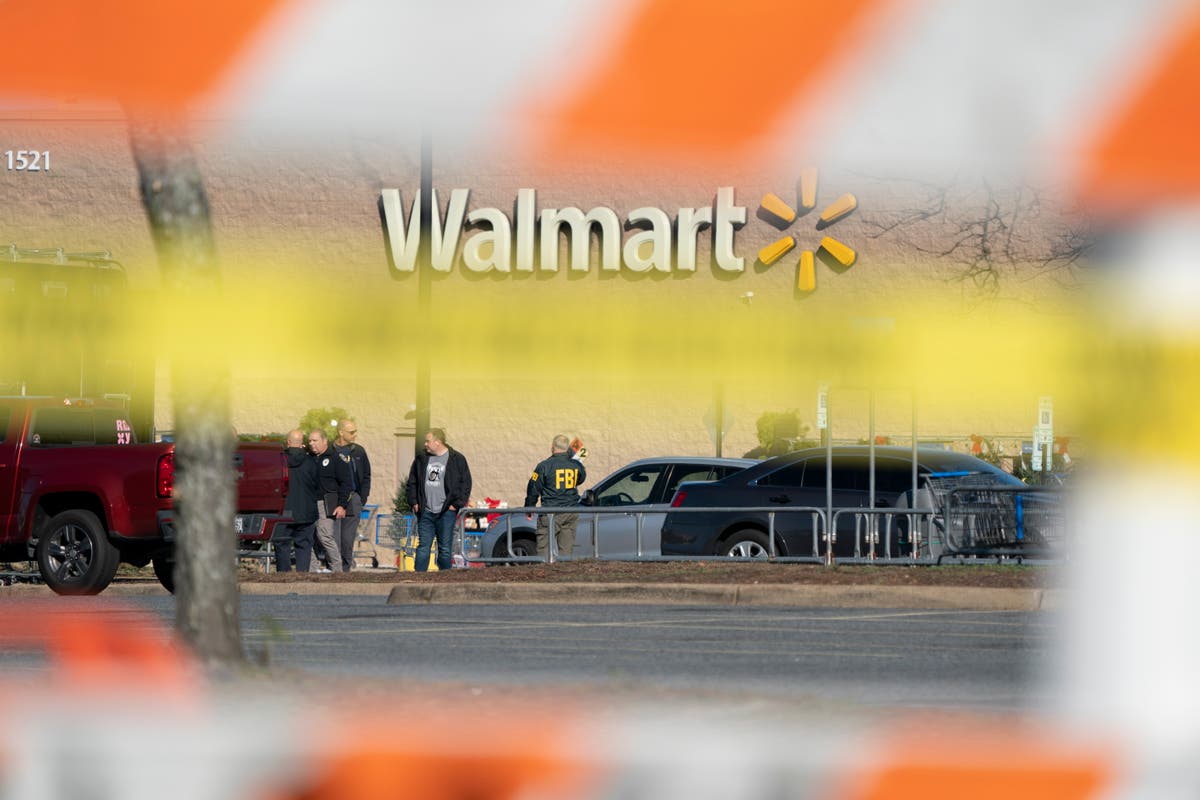 Sign up to our free morning US email news bulletin

A second high-profile mass shooting within three days took place in a familiar location: inside the nation’s largest retailer, where dozens of acts of gun violence have played out over the last several years.

On 22 November, two days before Thanksgiving, an overnight manager at a Walmart store in Chesapeake, Virginia fatally shot six people with a pistol before turning the gun on himself.

Two other victims are in critical condition, according to police. Fifty people were in the store at the time.

Mass shootings in which four or more people are killed or injured have reached more than 600 in 2022, averaging more than one per day, according to the Gun Violence Archive. There has not been a single week in 2022 without at least four.

Last year, there were nearly 700 mass shootings, spiking from 610 in 2020 and 417 in 2019. Before that, mass shootings had not surpassed 400 annually since the organisation began tracking such incidents in 2014.

On 20 November, five people were fatally shot and at least 18 others were injured inside a LGBT+ club in Colorado Springs.

The shooting in Chesapeake is the latest public massacre in a retail store, where more than 217 people have been killed and 227 injured over the last five decades in mass acts of violence.

But such massacres have become more frequent and deadly within the past several years, with 2019 and 2021 reflecting the worst years on record for retail shootings, according to The Violence Project.

Walmart – often the only grocery store in many areas across the country, and a ubiquitous presence with more than 4,000 stores in the US – has been the site of 363 gun-related incidents and 112 gun deaths since 1 January, 2020, according to advocacy group Guns Down America.

On 3 August, 2019, a 21-year-old white nationalist drove 650 miles to a Walmart in El Paso, Texas to stop what he called the “Hispanic invasion” in his alleged manifesto.

According to police, the gunman entered the store, unarmed, then returned to his car for his assault rifle. He started shooting before he reached the door, killing 23 people and injuring dozens of others.

The massacre – the deadliest attack against Latinos in modern American history – has been labelled a domestic terror attack by federal law enforcement. The suspect faces state capital murder charges and 90 federal crimes.

Days earlier, a gunman described as a disgruntled Walmart employee fatally shot two of his co-workers and wounded a police officer before his arrest at a Walmart store in northern Mississippi.

Even in just the week before those high-profile shootings, at least three people were killed at Walmart stores across the country.

Following the El Paso and Mississippi shootings, Walmart officials urged Congress and then-President Donald Trump to strengthen federal background checks and resume debate on reinstating a federal ban on assault weapons like AR-15-style rifles, which had expired in 2004.

“As we’ve seen before, these horrific events occur and then the spotlight fades,” Walmart’s chief executive Doug McMillon said in a statement at the time. “We should not allow that to happen. Congress and the administration should act.”

The retailer also happens to sell firearms at many of its locations – putting the company at the centre of debate over both gun ownership and regular American violence.

By virtue of its enormous reach with thousands of stores – often in big-box retail buildings – across the US, Walmart’s stores are often the site of violent crimes.

Even before the El Paso massacre, Walmart had already imposed restrictions on firearm sales as retailers faced increased scrutiny in the wake of increasingly frequent mass shootings. The company had stopped selling AR-style firearms as well as handguns and had raised the age limit to purchase a firearm from 18 to 21 years old.

Walmart also requires a so-called “green light” on background checks and for sales to be captured on video.

After the El Paso and Mississippi killings, the company also discontinued sales of most handgun ammunition as well as short-barrel rifle ammunition that could be fitted in large capacity clips on military-style weapons.

“We believe these actions will reduce our market share of ammunition from around 20 per cent to a range of approximately 6 to 9 per cent,” Mr McMillon stated at the time.

Walmart also discouraged customers from carrying firearms into its stores, even in states with so-called “open carry” laws.

In that announcement, Mr McMillon pointed to “multiple incidents since El Paso, where individuals attempting to make a statement and test our response have entered our stores carrying weapons in a way that frightened or concerned our associates and customers.”

Following the killings in Colorado Springs and Chesapeake, President Joe Biden twice called on Congress to renew the assault weapons ban, which would target AR-style rifles that have been used in mass acts of violence across the US.

AR-style rifles have been used in one-third of all mass shootings in retail stores, according to The Violence Project.

A 19-year-old white gunman is accused of using an AR-style rifle to kill 10 Black people in a supermarket in Buffalo, New York. He faces a 27-count federal indictment including 10 counts of hate crimes resulting in death.

Since 1 January 2020, there have been at least 536 acts of gun violence in or around major grocery stores, according to Guns Down America.

“Grocery retailers must do their part to help build a future with fewer guns and safer communities,” Igor Volsky, executive director of Guns Down America, said in a statement.

Meanwhile, more Americans are buying guns than ever before, with 2021 as the second-busiest year on record for gun retailers. Americans bought roughly 19.9 million firearms last year.

In June, the president signed the Bipartisan Safer Communities Act, which intends to curb the proliferation of high-powered firearms.

State law requires universal background checks for gun sales, reporting requirements for lost or stolen firearms, a limit of one handgun purchase per month for most people, and a “red flag” provision that allows law enforcement to seize firearms from people who pose an immediate threat to themselves or others.

Another recent bill limits possession of a firearm for people convicted of assaulting a family member.

But Republican Governor Glenn Youngkin, who has blamed the Chesapeake shooting on the “mental health crisis”, has indicated that he could roll back some of those measures.

Everytown for Gun Safety ranks the state as having the 14th strongest gun control policies in the US. But the reform organisation also reports that roughly 1,065 people are killed by gun violence in Virginia every year, and 1,911 others are wounded.

Gun violence is also the leading cause of death among children and teens in the state.

Shannon Watts, founder of Everytown partner organisation Moms Demand Action, said that for the second time in a week, “a shooter brought a gun to a place where people were trying to just live their lives and murdered innocent civilians.”

Caia DelaVergne, a gun violence survivor and volunteer with Everytown partner organisation Moms Demand Action in Virginia, said that “a space that should have been safe has been shattered by preventable gun violence, and our entire community has been forever traumatized.”

“These families shouldn’t have to spend the holiday season sitting across from empty chairs or burying their loved ones,” she said in a statement. “We won’t stop fighting until tragedies like this stop happening in Virginia or anywhere else.”

Distracted driving; blood on their hands; fossil fuel protests; old format option
I can’t forget the Sandy Hook shooting
Time to reinstate assault weapons ban
Letter to the editor: Step up with a solution on guns | Letters to the Editor
Biden’s Criticism of Semiautomatic Guns Unintentional