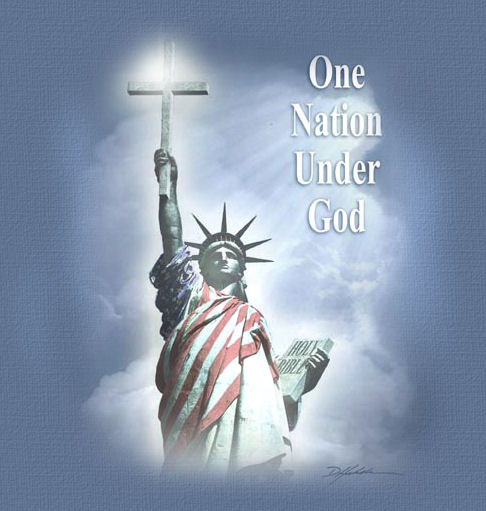 (ThyBlackMan.com) Americahas always been a country that has claimed to abide by the Supreme Intelligence’s instructions, and to honor “IT” first in all undertakings. This acknowledgement of God is exemplified in every American community, city and town, where a church sits prominently on almost every corner in matriarchal fashion. The idea that Americah as always been a bastion of religious freedom is reassuring, but this premise seems to be utterly at odds with its historical record of blood bathing.

Even with the abundance of sanctuaries and, in effect, one would think vast opportunities for peace, unfettered internal joy, and soul-saving in this nation;  violence, unhappiness, and spiritual sickness imminently prevail and reign supreme.  A nation which has embedded in its currency “In God we trust” is actually a misnomer because in terms of trust and allegiance, God ranks third, behind the almighty dollar and America’s love affair with firearms. Moreover, continuous efforts toward oppression or significant distinctions in social class are contradictory to the whole idea of unified trust, social welfare, mental and spiritual health. Clearly, hypocrisy exists between that which America says it represents versus what it actually does represent.

“Live by the sword, die by the sword” is a saying derived from a Biblical parable to the affect that if one uses violence, or other harsh means, against other people, that individual can expect to have those same means used  against them. That same individual can expect to become a victim of whatever means they use to get what they want. America has been living by the sword since its inception. Social war has raged throughout the land, starting a trail of blood painted with the blood of Native Americans, and continuing on with chattel slavery, Jim Crowism, and Tulsa City, Oklahoma’s “Black Wall Street” where 3,000 people were massacred. And, noteworthy, all of these acts were carried out in the name of God.

Today, America is now dying by that same sword as citizens watch their own neighbors turn guns on one another for none or insignificant reasons. This fact is proven in gang violence, the Columbine shooting, and other senseless shootings. Just think about the past events, such as the theatre massacre in Aurora, Colorado.

The shooter, James Holmes, is symptomatic of a greater and more profound problem that pierces deep into the hearts, minds and souls of the American people. Although the shooter’s motives cannot be justified, his act was potentially a result of the mentality or stance America has accepted and actively carried out regarding violence, aggressive attacks, and taking whatever the country wants by any means necessary, at all costs. As well, modern day American movies, videos, and television are littered with violence; the appetite for such mind exposure serves as a detriment to the mental health and welfare of a vibrant nation. “Treat the cause, and not the symptom” is also fitting to this horrific incident as the event was not an anomaly or aberration, rather, another wave exposed in an already flooding tidal surge.

In the U.S., the Constitution obligates elected officials to protect Americans and property against all enemies foreign and domestic.  The U.S. military force is not in place to mount unprovoked attacks, but to defend this nation; however, the mission of the U.S. military, to date, appears to be transgressing such a noble responsibility, and is now more concerned with protecting the invested interest of big corporations by any means necessary.

Gun violence has become a way of life in America and there seems to be no end in sight. The NRA’s political activity is based on the principle that gun ownership is a civil liberty protected by the Second Amendment of the Bill of Rights, and will never obey any orders to disarm the American people. Moreover, the NRA’s perceived conspiratorial theories about the possibilities of a tyrannical U.S. government takeover and a race war all but seem to seal America’s fate and destiny to eventually perish by the sword.

There is an element of truth that when governments fear the people, there is liberty. When the people fear the government, there is tyranny. The strongest reason for the people to retain the right to keep and bear arms is, as a last resort, to protect themselves against tyranny in government.  The advent of a New World Order (Globalization) poses such a threat. In any other sense, people bearing arms—along with unsteady mentalities will only breed continual and unnecessary destruction. Subsequently, because of this pre-occupation with violence and death, some serious collective reflection and intervention needs to be done by the U.S. on the issue of gun control.

Buddha once said: “However many holy words you read, However many you speak, What good will they do you, If you do not act upon them?”

When power is given over to the spiritual side of one’s being, a tyrannical government’s attempts at manipulation and control of the masses will prove futile.

At this point in time, America must find its way to what it claimed the country was originally founded upon: authentic trust in God, and liberty and justice for all. Only then can the collective people find their way out of the darkness of misguided thinking and into the light of a higher essence.

Presently, there exists a crisis of faith in man’s inner self, his spiritual being, failing to thus far evolve into a spiritual force (free of dogmas and creeds), leaving him vulnerable to a materialistic society, making him a prisoner of his own devices and mechanisms, unhappiness and a sickness of mind.  Spirituality is not synonymous with the taking of another person’s life, but it is synonymous with love.  America’s slogan “In God we trust” in practice translates to “In Guns we trust” serving as an ominous omen to what lies ahead.

This talented brother is the founder and president of UVCC, the United Voices for a Common Cause, Inc. ( http://www.theunitedvoices.com );  and author of “Bury that Sucka: A Scandalous Love Affair with the N-Word“.

How can we put an end to mass shootings in the U.S.?
Gun rights groups speak out as Washington state Dems eye ban on semi-automatic rifles
‘We Live in Florida … Most People Are Armed’
Illinois State Police asks to consolidate federal gun ban lawsuits
ILA | Biden Goes Through the Motions, Drags Out Stock Gun Control Script