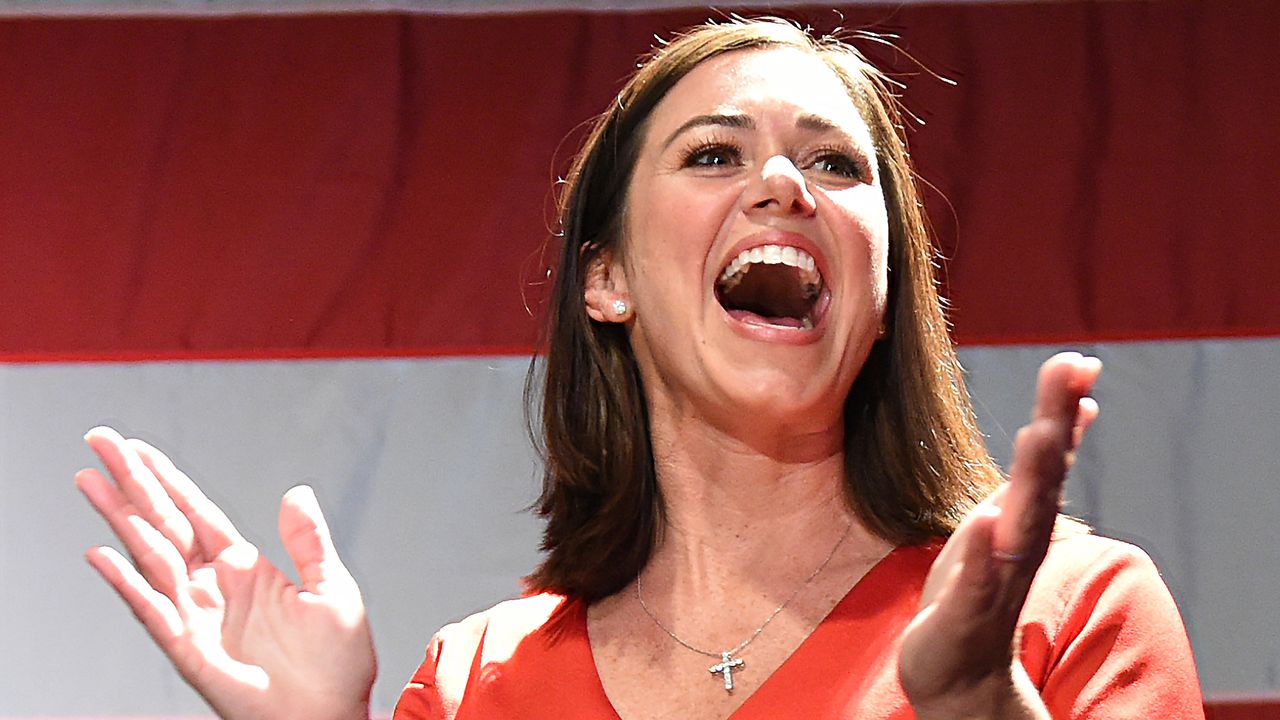 When U.S. Sen. Richard Shelby announced in 2021 that he would not seek another term in office, he set the stage for Alabama’s biggest political story of 2022, the race to succeed the state’s longest serving senator.

The volatile battle between Republican Party contenders for Shelby’s seat topped the news during an election year that also saw Kay Ivey become the first woman twice elected Alabama’s governor. The GOP maintained its dominance in statewide races and its hold on six of seven Congressional seats and three-fourths of the seats in the Alabama Legislature. And a lawsuit alleging that Alabama’s congressional district map is racially gerrymandered to dilute Black votes reached the U.S. Supreme Court, which is expected to rule next year.

Britt, an Enterprise native, had served as chief of staff for Shelby and then as president of the Business Council of Alabama. Britt won the endorsement of her former boss, who also pledged his financial support. Momentum in the race shifted more than once. In March, Trump withdrew his endorsement of Brooks, who was slipping in the polls. Businessman and former Army aviator Mike Durant surged ahead in the polls in March but eventually faded.

In the May primary, Britt led the six-candidate field, receiving 45 percent, setting up a runoff with Brooks, who had 29 percent. During the runoff campaign, Trump endorsed Britt, who by that time was already far ahead in polls. Britt soundly defeated Brooks in the runoff. In the general election, Britt received 67 percent of the vote, making the 40-year-old the first woman elected to the U.S. Senate from Alabama.

Eight candidates challenged Gov. Kay Ivey in the Republican primary in May, including two with enough campaign money to target the incumbent in statewide TV ads — Lindy Blanchard, who spent $11 million in a self-funded campaign, and Tim James, who spent $4.5 million.

But Ivey, who spent $10.5 million, won the primary without a runoff and cruised to victory in the general election with 67 percent of the vote.

The 78-year-old governor became the first woman elected twice to the office. Ivey has held the office since replacing Robert Bentley when Bentley resigned in April 2017. At the end of her next term, she will have served almost 10 years, the longest consecutive run for any Alabama governor. George Wallace served four terms but none were consecutive.

Ivey has promised to make improving education in Alabama the main goal of her next term.

In November, Gov. Kay Ivey called for a pause on executions to allow the Alabama Department of Corrections to conduct a “top-to-bottom” review of how it carries out lethal injections. The governor’s decision came after the state failed to carry out two scheduled executions.

Alan Eugene Miller was scheduled to die on Sept. 22, but the procedure was called off because of the inability to access veins for the injection. Kenneth Eugene Smith was scheduled for execution on Nov. 17, but his execution was called off for the same reason. The execution of Joe Nathan James Jr., carried out in July, started three hours late and raised questions about the procedure. And in 2018, Alabama called off the attempt to execute Doyle Lee Hamm was called off because of concerns it could not be finished by midnight. The state did not try to execute Hamm again and he died of cancer in 2021.

The attempts to execute Miller and Smith started late because of legal challenges that reached the U.S. Supreme Court. Ivey, in calling for the review, blamed the failed executions on those delays. But Robert Dunham, executive director of the Death Penalty Information Center, said the failed executions showed incompetence. He called for an independent review instead of one by the state. A federal judge ordered the ADOC to preserve evidence from both failed execution attempts.

In late November, Alabama reached a settlement with Miller, agreeing not to try again to execute him by lethal injection. Miller claims he chose to be executed by nitrogen hypoxia in 2018 when death row inmates could make that choice. The Legislature authorized nitrogen hypoxia executions four years ago but the method has never been used in any state and Alabama is still not ready to use it.

In early December, Attorney General Steve Marshall said he was not opposed to the review of the execution procedures but wanted it done quickly so the state could begin setting new execution dates.

On Dec. 12, Ivey released a letter to the Alabama Supreme Court asking the court to change a longstanding rule restricting executions in Alabama to a single day. The state was also considering starting executions earlier than 6 p.m., Ivey wrote.

In October, the U.S. Supreme Court heard arguments in a lawsuit alleging that Alabama’s congressional district map is racially gerrymandered to the disadvantage of Black voters.

It was the same case that sent shockwaves through Alabama politics earlier in the year.

In January, a three-judge federal panel ruled that the plaintiffs challenging the district map were “substantially likely to establish” that the map violates the Voting Rights Act because “Black voters have less opportunity than other Alabamians to elect candidates of their choice to Congress.” Black voters are a majority in only one of Alabama’s seven congressional districts even though Blacks make up 27 percent of the state’s population. The judges issued an injunction against using the map and ordered the Legislature to draw a new one with a second majority Black district.

In February, the Supreme Court, at Alabama’s request and in a 5-4 decision, blocked the three-judge court’s ruling, allowing the disputed map to be used in this year’s elections. But the justices did not rule on the merits of the case, setting the stage for the oral arguments that took place in October. The Supreme Court is expected to rule in the case, called Merrill v. Milligan, by late June of next year. Alabama has had six white Republicans and one Black Democrat in the U.S. House since 1990. But that could change if the plaintiffs prevail in the case.

For three years, one of the most intensely debated bills in the Alabama Legislature was a proposal to make it a crime to provide puberty blocking medications or hormones or to perform surgeries on transgender minors to help them transition.

Public hearings drew packed crowds. Parents and advocates held rallies to oppose the bill. The Alabama Chapter of the American Academy of Pediatrics opposed it the legislation.

Supporters of the legislation, including some doctors, said the purpose of the bill, the Alabama Vulnerable Child Compassion and Protection Act, was to protect minors from medical treatments they might later regret, including consequences such as sterility and loss of sexual function.

This year, lawmakers passed the bill on the last day of the legislative session in April, making Alabama the first state to impose criminal penalties on the treatments.

Parents of four transgender minors, joined by a pediatrician, a child psychologist, and a pastor, filed a federal lawsuit to block the law. The U.S. Department of Justice sided with the plaintiffs.

In May, U.S. District Judge Liles Burke issued a temporary injunction blocking enforcement of the law until the case can be resolved. Burke, who issued his ruling after holding a three-day hearing, found that the law was likely unconstitutional.

Burke did not block the ban on surgeries. The plaintiffs told the judge they were not challenging that part of the law.

The state appealed Burke’s injunction to the 11th Circuit Court of Appeals. A panel of judges from the appeals court held a hearing in the case in November. The court will decide whether to allow the state to enforce the law while the case proceeds in Burke’s court.

For about a decade, the Alabama Legislature discussed but did not pass a bill to repeal the requirement to buy a permit from a county sheriff to carry a concealed handgun.

Proponents of “constitutional carry” said the permit requirement infringed on the Second Amendment, a position backed by the National Rifle Association and other gun rights groups. The Alabama Sheriffs Association and some others in law enforcement said the permit and background check requirement was an important tool to prevent and investigate crime. Sheriffs depended on the permit fees to help fund their operations.

This year, the “constitutional carry” proponents finally prevailed. The House and Senate passed the bill, with most Republicans supporting it and most Democrats opposed. Gov. Kay Ivey signed it into law in March. It takes effect Jan. 1.

Lawmakers set up a grant program intended to help sheriffs offset the loss of pistol permit revenue, although some have questioned whether it will be sufficient.

The year marked the end of the acclaimed career of Sen. Richard Shelby, who has represented Alabama in Washington for 44 years, the last 36 years in the U.S. Senate.

The 88-year-old former city prosecutor from Tuscaloosa continued to help shape the future of his home state, using his influence and campaign funds to help his former chief of staff, Katie Britt, win a bruising campaign to succeed him in Washington.

It was another victory for a politician who did not lose in a dozen of his own races during a 51-year career in office and who broke the record of John Sparkman in 2019 to become Alabama’s longest serving senator. Shelby earned a reputation for putting his seniority and influence to work, steering federal dollars and projects to support the military, industry, education, and jobs in Alabama.

As the year wound down, Alabama’s Redstone Arsenal was in position to be picked by the Air Force as the permanent home for the U.S. Space Command thanks partly to Shelby’s influence.

In his farewell speech on the Senate floor on Dec. 14, Shelby urged Republicans and Democrats to seek common ground.

“Today, I think we’ve become too polarized,” Shelby said. “There are a lot of reasons for that, we understand. But I can say we need to get back to the basics and to put the country first. We must not put ourselves or our party first. We must put America first. We have to.”

Alabama voters saw a third political party on their ballots this year. The Libertarian Party of Alabama earned that spot for the first time since 2002.

The Libertarians completed a successful petition drive to get their candidates on the ballot, rounding up about 80,000 signatures of registered voters to exceed the requirement, which is 3 percent of the total number of votes cast in the last governor’s race, about 52,000.

Libertarians ran for the U.S. Senate, governor and in seven other statewide races. They ran for all seven Congressional seats, 27 Alabama House seats, and 11 Alabama Senate seats.

None of those candidates won, and the party fell short of a key goal. If a Libertarian candidate had received at least 20 percent of the vote in any statewide race, the party’s statewide ballot status would have extended to 2024 without the need for another petition effort.

The best chances to hit the 20 percent threshold came in six statewide races that pitted a Libertarian against a Republican, with no Democratic candidate. The races were for lieutenant governor, state treasurer, state auditor, agriculture and industries commissioner, and two seats on the Public Service Commission.

Libertarian candidates got 15 percent to 16 percent of the vote in all six of the races.