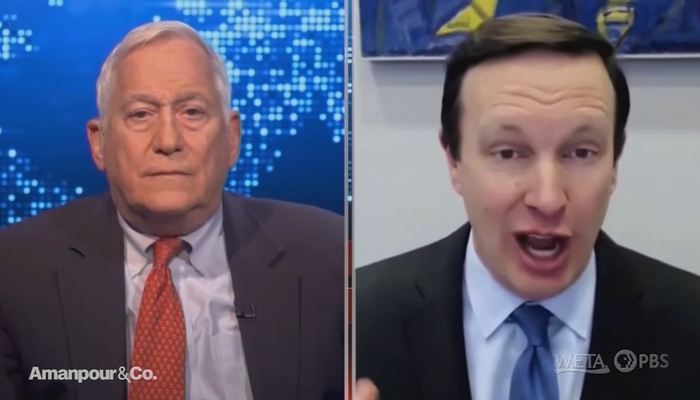 Appearing on the show which is shown on both PBS and CNN International, Senator Murphy recalled that he became an activist on gun control after the event, leading Isaacson to follow up: “If firearms is the leading cause of death among young kids, what could be done next? What would you like to see happen after this reform of the past year?”

Even though federal law requires anyone who sells weapons for profit to do a background check on the buyer, the liberal Senator claimed some states do not have background checks, which he blamed for fueling the illegal gun market:

He then talked up other gun restrictions he wants Congress to pass. Isaacson, true to form as a liberal journalist, did not push back on any of his guest’s liberal agenda. He might, for example, have pointed out that there were more murders in Murphy’s home state in 2021 than there were back in 2013 when substantial gun control was passed at the state level when the number of murders was only 93 the whole year compared to 150 in 2021.

On the previous Sunday’s CNN special, Sandy Hook: Forever Remembered, host Alisyn Camerota recalled the law from 2013 and tried to spin it as successful without mentioning the overall increase in murders: “Since the law was passed, Connecticut has not had a single shooting with more than three fatalities.”

This segment was paid for in part by the Anderson Family Fund and by viewers like you. You can fight back by letting advertisers know how you feel about then sponsoring such content.

SENATOR CHRIS MURPHY (D-CT): I’m embarrassed that I didn’t work on the issue of gun violence before Sandy Hook. I should have been working on this issue — it was plaguing cities in my state. But it was a wakeup call to me and to the nation, and I decided to devote my career to trying to change the laws of this country and make a Sandy Hook less likely.

Obviously, we have seen mass shooting after mass shooting, spikes in homicides all over the country, but this year, though, we did pass, for the first time in 30 years, a major gun safety initiative, and I’m proud that our movement has now become strong enough — that movement has as part of it many of the families — many of the students from Sandy Hook, and I’m very proud of them.

WALTER ISAACSON: If firearms is the leading cause of death among young kids, what could be done next? What would you like to see happen after this reform of the past year?

The second thing we should take a look at is the safe storage of firearms. A lot of these shootings are accidental. A lot of shootings involve a kid taking a weapon from an adult in that scenario where there might not be as much politics, right? Because the gun owners — even NRA members — generally agree that storing your weapon by safely locking them up is an important part of your responsibility. So those are two things I think we could do. Assault weapons bans — those are harder to get passed in a split Congress. But safe storage, background checks, those are certainly within the realm of possibility.

CAMEROTA: In early April 2013, the Connecticut legislature passed sweeping gun legislation, adding around 100 firearms to an existing assault weapons ban, and banning the future sale of magazines with more than 10 bullets.

FORMER STATE SENATOR JOHN McKINLEY (R-CT): Knowing that the eyes of the country were on us — were on the tragedy in Newtown, maybe we would send a message that some things need to be beyond politics.

CAMEROTA: Since the law was passed, Connecticut has not had a single shooting with more than three fatalities. After the huge state-level win, many families from Newtown were hopeful for a nationwide victory, and made the trip to D.C. for the vote in the Senate.

NICOLE HOCKLEY, MOTHER OF SCHOOL SHOOTING VICTIM: I was very hopeful at that point because I assumed that we were going to have a victory there.

MARK BARDEN, FATHER OF SCHOOL SHOOTING VICTIM: I knew that at least 90 percent of Americans wanted to see that happen. I just thought, “Okay, this is simple — this is basic — this is what everybody wants.”

VICE PRESIDENT JOE BIDEN (presiding over U.S. Senate): –requiring 60 votes for the adoption of this amendment, the amendment is not agreed to.

PRESIDENT BARACK OBAMA: A minority in the United States Senate decided it wasn’t worth it. They blocked common sense gun reform even while these families looked on from the Senate gallery. This was a pretty shameful day for Washington.

HOCKLEY: I was just — I was floored. I was absolutely devastated because I thought with — with all of the momentum after the shooting — with all of the public polling that showed the people wanted background checks. I received a very hard and devastating lesson on politics that day.

BARDEN: The gun lobby was able to influence legislators because, when the polls were done, passing that universal background check bill at the federal level was polling higher than ice cream and baseball. Over 90 percent of Americans wanted that done. And then it didn’t pass.