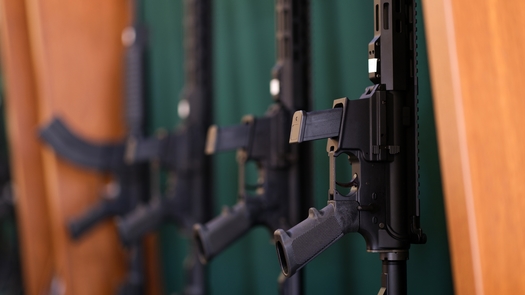 Illinois has become the ninth state to approve a statewide ban on assault rifles and high-capacity ammunition magazines.

On Tuesday, the Protect Illinois Communities Act passed by the General Assembly along party lines, bans AR-15s and other military-style weapons, and limits long-gun magazines to 10 rounds and handguns to 15.

The measure was passed just six months following a mass shooting at a July 4th parade in Highland Park, which left seven people dead and 48 injured.

Sheri Wilson, Illinois chapter co-leader for Moms Demand Action, said it has been a long haul, but was worth it.

“Regular citizens should not be having access to weapons of war,” Wilson contended. “These massacres that we see on the news are typically a result of having an assault weapon by the hand of the shooter. So, that is significant.”

Gov. JB Pritzker said he will sign the legislation. Gun-rights advocates and firearms dealers have vowed to take the state to court over the ban, calling it a “clear violation of Second Amendment rights.” Current owners would be able to keep their guns for limited use, but must register them and provide serial numbers to the Illinois State Police.

The bill also includes expedited implementation of universal background checks, but does not change the age for firearms ID cards. Wilson pointed out the measure contains many of the elements her group wanted in a gun-control measure.

“It addresses gun suicide, assault weapons, and getting the serial numbers onto these weapons is really important,” Wilson asserted. “And that’s one of the things that we pushed for.”

Wilson added Moms Demand Action was created shortly after the Sandy Hook shooting took place in December 2012, and many of its members have connections to people killed or injured in mass shootings.

“The reason why we do this work is so that we recognize the people that have had their lives taken from gun violence,” Wilson explained. “And also the surviving family members and friends because that pain just never goes away.”

Community members continue to voice concerns about gunshot-detecting technology being considered in Portland.

At a recent Inter-Faith Peace and Action Collaborative meeting, opponents of the technology known as ShotSpotter pointed out its weaknesses.

Jonathan Manes, attorney at the MacArthur Justice Center in Chicago, where the ShotSpotter surveillance system has been implemented, said there are no published studies about how the technology responds to loud noises, and notes every time it is triggered, police are expecting to find someone armed and potentially dangerous.

“To the extent that the system is being triggered by loud noises — like fireworks, cars backfiring, etc. — it’s creating unnecessary, dangerous situations, and putting people under false suspicion,” Manes contended.

Supporters of the ShotSpotter program said it is necessary to address the growing number of gun deaths in Portland. But a 2021 study from the MacArthur Justice Center found it led to more than 40,000 dead-end police deployments in Chicago in less than two years. A ShotSpotter spokesperson says the report draws erroneous conclusions from its interpretation of police reports.

Je Amaechi, digital organizer for Portland-based Freedom to Thrive, who also spoke at the Inter-Faith meeting, said a more equitable response to gun violence would be to help lift people out of poverty.

“Spending thousands of dollars, and even millions on a system that primes police to see underserved people in a particular region as armed assailants – that is not an equitable use of data, in any kind of way,” Amaechi asserted. “And the idea that it could be an equitable data – I mean, it escapes reason.”

The ShotSpotter contract with Portland could be worth up to $1 million a year.

Sarah Hamid, campaign director for the Carceral Tech Resistance Network in Portland, spoke at the meeting as well. She said there are racial disparities in how the ShotSpotter technology has been implemented in other cities.

“So, when we think about why it is that people are starting to feel that technology is racist, it might just be because old racisms are being recuperated through scientific language,” Hamid contended.

Portland Mayor Ted Wheeler’s office is developing a proposal for the city council on ShotSpotter, but has not yet established a timeline for when it would be introduced.

Disclosure: Freedom to Thrive contributes to our fund for reporting on Criminal Justice, Immigrant Issues, LGBTQIA Issues, and Social Justice. If you would like to help support news in the public interest, click here.

A bill before the New York State Legislature would remove the National Rifle Association’s ability to certify gun-safety instructors.

Under Senate Bill 9601, the state Department of Criminal Justice Services would develop a curriculum for gun-safety training. The legislation comes several months after the Supreme Court struck down the state’s concealed-carry laws, which required that a person show “proper cause” to want to carry a gun.

State Sen. Sean Ryan, D-Buffalo, who introduced the new bill, said it was brought forward because of the NRA’s support for that lawsuit. He described what he hopes the training would cover.

“I would hope if the Department of Criminal Justice Services makes up the curriculum,” he said, “that they will then train New Yorkers about how to safely store their guns, the responsibility of a gun owner – vis-a-vis children in the house – but also to go over places where guns are and are not allowed in New York State.”

Ryan said he’s seen opposition from the New York State Pistol and Rifle Association. In the long term, he said, he’s convinced passing the bill would create a safer New York. The bill is currently in the Senate Rules Committee.

Ryan said he hopes the new curriculum would mean gun-safety instructors could also better inform people about how stolen guns end up on the street.

Overall, Ryan said, he just wants to ensure that gun owners in the state exercise a high standard of care and safety with firearms. According to the Centers for Disease Control and Prevention, New York already has a relatively low rate of firearms deaths. Statewide, they numbered 1,052 in 2020.

On the ten-year anniversary of the shooting at Sandy Hook Elementary School, a local organization is still working to see a national assault-weapons ban.

Newtown Action Alliance, founded briefly after the Sandy Hook shooting, has been active in getting Connecticut’s assault weapons ban passed.

The group has also spoken with congressional officials about a national ban.

David Stowe, co-founder and vice chairman of the alliance, describes where the U.S. is with assault weapons in the ten years since the shootings.

In his words, it’s “insane” that people can be armed with weapons made for war.

“Where we are now, I would say, I think we wake up every day and more and more Americans are horrified by one, about the fact that people can own those weapons,” said Stowe, “and two, that we actually have not done anything to stop them. There were some small, little pieces in the Safer Communities Act that passed this summer.”

In the Bipartisan Safer Communities Act, background checks were expanded for people under 21, and federal firearms restrictions were extended to include people convicted of domestic violence misdemeanors against dating partners.

Stowe said he feels that, in the current lame-duck Congress, a ban would not make it through the filibuster process.

But he said he thinks there should at least be a vote – to demonstrate where individual lawmakers stand on an assault-weapons ban.

One priority for Stowe is to see a shift in the tone of the conversation about assault weapons. He said he feels people could do a better job of listening to one another when talking about gun safety regulations.

“You have to look at the root causes of gun violence, and there’s a number of them,” said Stowe. “One is the proliferation of guns in our country, and how easy it is to get guns – so we absolutely need to address that with legislative approach.”

He added that having safe-storage laws and making sure people with mental illness don’t have gun access would help as well. And he pointed out that mental-health services must have more funding in order to help more people.