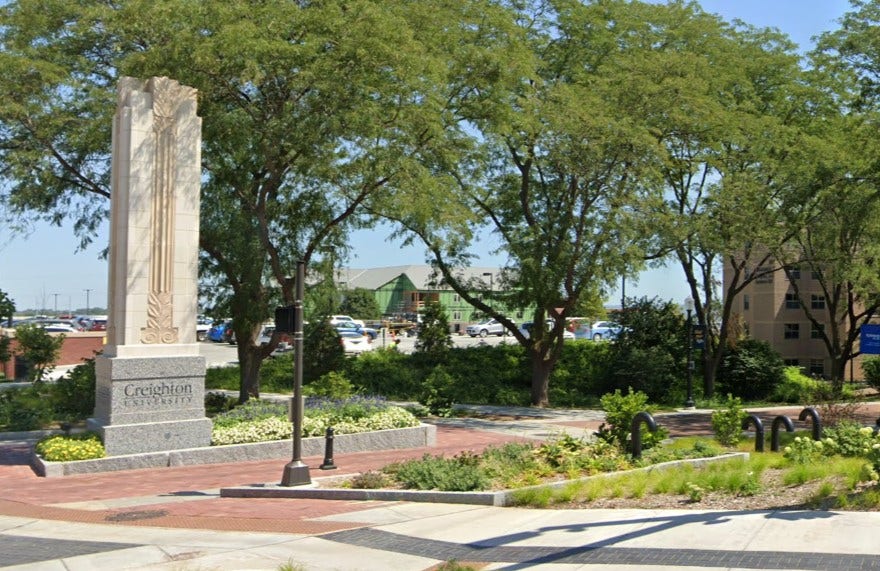 An Omaha, Nebraska, university ordered a student organization to remove political posters depicting guns and slogans that some found offensive, according to reports.

The College Fix, a conservative news website focused on higher education, reported that Creighton University has a ban on pro-Second Amendment poster, and members of the Young Americans for Liberty are currently fighting to get that ban overturned.

A student organization at Creighton University was told to remove posters containing images of guns because it goes against a school policy, according to reports.
(Google Maps)

The group claims the ban infringes on their First Amendment rights.

After being told to remove the political posters, University officials told Mason Wood, chapter leader during the Fall 2022 semester, he was required to fill out paperwork to host a “Controversial Event” if he wanted to pass a petition seeking to end the school’s ban on gun images.

A representative for the Young Americans for Liberty told The College Fix that the school administration at Creighton maintains its ban on imagery of guns, even when it comes to political speeches on the Second Amendment.

“While the Second Amendment remains one of the top political issues in the country, Creighton’s administration acts like its students are children – unable to handle the image of a common firearm or know how to speak about issues without permission from a bureaucrat,” YAL director of student rights JP Kirby told The College Fix. “We at YAL trust our students as the free-thinking adults they are, and we support their rights to share their beliefs with others.”

YAL officials did not respond to inquiries regarding the challenges the Creighton chapter was facing.

FILE – Students walk across 24th Street after the 24th Street dedication and ribbon cutting on the Creighton University campus in Omaha, Neb., Thursday, Sept. 24, 2020. The Nebraska Supreme Court on Friday, Aug. 12, 2022, has dismissed an appeal by a handful of Creighton University students seeking to be exempt from the school’s COVID-19 vaccine mandate last year, arguing that getting the shots would violate their religious beliefs against abortion. (Lily Smith/Omaha World-Herald via AP)
(Lily Smith/Omaha World-Herald via AP)

Creighton Assistant Director for Programming and Student Organizations Sarah Giacomini told Wood in an email that the school does not allow images of guns to be used in posters. When Wood submitted the event to Giacomini, he provided handouts with guns, and was told they need to be removed.

“This is something we have done in the past with other organizations,” she told Wood. “If you choose to use the images of guns in the future and would like to plan an event under our Freedom of Expression Act or host a Controversial Event, we can have that conversation, but because you are just wanting to table this week, these are my requirements. If these changes cannot be made, then you will not be allowed to table on campus tomorrow.”

Creighton officials did not immediately respond to questions pertaining to the ban and Giacomini’s requirements.

Creighton University is a private Catholic institution, so it does not necessarily have to follow the same rules as public universities.

FATIGUE, FRUSTRATION BUILD AS CA SEES 3RD MASS SHOOTING IN OVER A WEEK

Still, its student handbook has a policy on Freedom of Expression.

In the policy, the university claims to strive to be a community dedicated to the pursuit of truth into the betterment of society. It also wants to ensure a safe learning environment.

“As a University, Creighton is committed to its role as an academic institution in which the widest possible freedom of expression and openness to diverse ideas should be responsibly presented and examined,” the policy reads. “It is because of these commitments that we embrace freedom of thought and expression.”